by Minerva
in Sports, Uncategorized
0

Sunrisers Hyderabad (SRH) are off to another terrible start in IPL. Their last two seasons have been below par and it seems the story is not going to change this year as well.

Sunrisers Hyderabad (SRH) are off to another terrible start in IPL. Their last two seasons have been below par and it seems the story is not going to change this year as well.

SRH fans are already angry with the owners and management for a terrible decision-making before and at the IPL 2022 Mega Auctions.

They let go their star leg-spinner in Rashid Khan, did not retain Jason Holder either and the world already knows how former captain David Warner was dealt with when he failed to score runs for  a brief period.

With SRH getting off to another bad start in another IPL season, fans are not happy with the franchise owners. SRH CEO Kaviya Maran, who is believed to have played a big role in deciding the squad, is getting the most of the hate from the fans.

One SRH fan brutally trolled her on social media, taking sarcastic jibes at her in a Facebook post.

He wrote that thanks to masterclass from Kaviya, SRH has ensured releasing Jonny Bairstow, Jason Holder and Rashid and retained uncapped Indian pacers while the powerhitters continue to come way down the batting order. 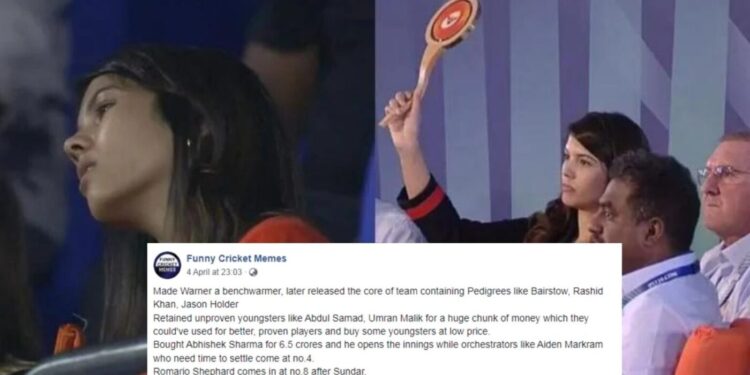 SRH began their IPL 2022 campaign with 61-run loss vs Rajasthan Royals, and in the second game they lost from a comfortable position by 12 runs vs Lucknow Super Giants (LSG).

These two losses have not hurt their campaign but also exposed their weaknesses to the other teams. SRH do not have a good bench strength either and the coming 12 games are going to be a difficult run for them. Many believe that after this season current SRH captain Kane Williamson may aso be sacked.

When you retain Abdul Samad and Umran Malik instead of Warner and Rashid pic.twitter.com/jYr5oqBYw7