‘Everybody wants to help us’ – Ukrainian Tourists in Srilanka

by Minerva
in International
0

Several Ukrainian and Russian tourists are stuck in Sri Lanka.Ukrainians say they are overwhelmed with support.Public sentiment overwhelmingly backs Ukraine in the conflict.As the sun dips below the Indian Ocean waves, Ukrainian tourist Viktoria Makarenko and her daughter light incense every evening at a temple in a Sri Lankan beach resort to pray for a return home.

Russia’s invasion of the 35-year-old’s homeland in February has left thousands of foreign travellers from the two countries stranded on the tropical island.

But Ukrainians with empty wallets, distraught over the fate of loved ones back home, say they have been overwhelmed by support from locals – despite their own travails in the face of a worsening financial crisis.

Everybody wants to help us.

She, her husband and their 5-year-old daughter had been travelling around Sri Lanka for weeks when Russian forces invaded Ukraine.

They were running low on cash and despairing of their predicament before locals in the resort town of Unawatuna rallied around them, offering free accommodation, food and even incense sticks to light on their daily trips to the shrine.

“The owner of this hotel let us stay here as long as we need. We have food, water, we don’t have a headache [over] what to eat tomorrow,” Makarenko said.

We stay safe here and they take care of us.

Along the white sands of Sri Lanka’s southern coastline, dozens of tourist-oriented businesses are advertising offers or assistance for stranded Ukrainians.

Ahesh Shanaka, the manager of the Blackgold café in Mirissa, said he asked one Ukrainian customer carrying a baby whether she was returning home.

“She said: ‘I cannot go back, my house was destroyed, where can I go?'”

A sign outside offers half-price meals upon presentation of a Ukrainian passport, and nearby guesthouses have given empty rooms to small cohorts of backpackers from the country.

Shanaka believes that his fellow Sri Lankans’ generosity stems from still-fresh memories of the island’s own experience of conflict – a decades-long civil war that ended in 2009.

We also faced a situation like that before … We know the suffering, we know the pain.

Sri Lanka’s current hardships have been bad for business: long queues for fuel and electricity blackouts are threatening to upend operators and bring a budding post-pandemic tourism revival to an abrupt end.

“We are in a bad situation, you know. The crisis, our economy is going down, everything is bad,” said Shanaka. 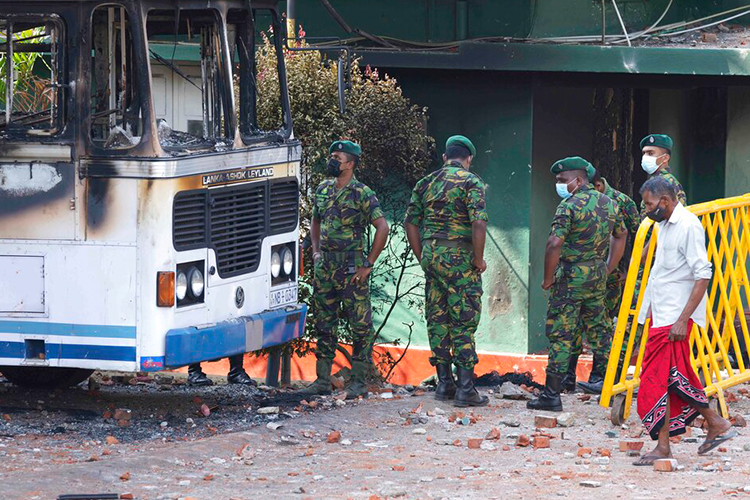 Official figures show about 15 000 Russians and 5 000 Ukrainians visited Sri Lanka in the month the conflict began – making up the island’s first- and third-biggest tourism sources respectively.

Sri Lanka has granted free visa extensions for citizens of both countries.

Many Russian tourists are also stuck in the country, cut off from funds after sanctions imposed by the US and Western allies on international payment networks.

But no offers for them are being advertised, and they are reluctant to talk.

“We have to go meet friends,” one young Russian said before he and his companions turned to contemplate the ocean view at the historic Dutch Fort in Galle.

People walk in front of a destroyed building in Chernihiv, Ukraine.

Public sentiment overwhelmingly backs Ukraine in the conflict. Slogans condemning the war are daubed in the yellow and blue of the country’s flag on walls up and down the coast.

“There is great compassion on their part, given that they are also in difficult circumstances,” Darina Stambuliak, another Ukrainian whose stay in Unawatuna was involuntarily extended by the war, told AFP.

The 33-year-old said she was previously forced to flee Donetsk when pro-Russian separatists declared a breakaway region in 2014.

She now spends much of her time anxiously keeping up with news from home. But a generous discount on her accommodation has given her one less cause for worry.

“Business owners have wrapped us in love and support,” she said.

“We are so grateful.”

Never miss a story. Choose from our range of newsletters to get the news you want delivered straight to your inbox.