A youth from Nayagarh district of Odisha has won the hearts of many for showing extraordinary courage in saving two people from drowning in deep sea on the Puducherry coast in Tamil Nadu without caring for own life.

Chittaranjan Pradhan (21), a resident of Patharpunji village in Ranpur Block of Nayagarh, is a former student and staff at the Sri Aurobinda Purnanga Shikshya Kendra in the district. Recently, he had been sent by the school authorities to attend a meditation training programme at Puducherry.

On that fateful evening on January 8, Chittaranjan was taking a stroll on the beach at Puducherry when he heard shrill cries of some people that caught everyone’s attention.

Chitta (as Chittaranjan is called by all) saw 3 people battling for their lives while desperately trying to save themselves from drowning in the sea at a distance from the coast. Though some life guards and other people watched the incident with horror, no one dared to come to their rescue. But without wasting time, Chitta jumped into a raging Bay of Bengal and dragged two of them to safety.

Sources said Chitta, in the process, managed to save three-time National Junior Boxing Gold Medalist and 17 year old girl from Coimbatore, Amrita Shivakumaran and her coach Sarbeswaran from the clutches of sure death. However, another champion female Boxer could not be rescued from the watery grave.

Soon after the news of the Chitta’s bravery hit the headlines in Tamil Nadu, the Speaker of the State Assembly invited the Odia youth and felicitated him at his residence. Many, including Chitta’s colleagues, extended their hearty congratulations to him for his audacious feat. He was accorded a warm welcome on his return to his native town. 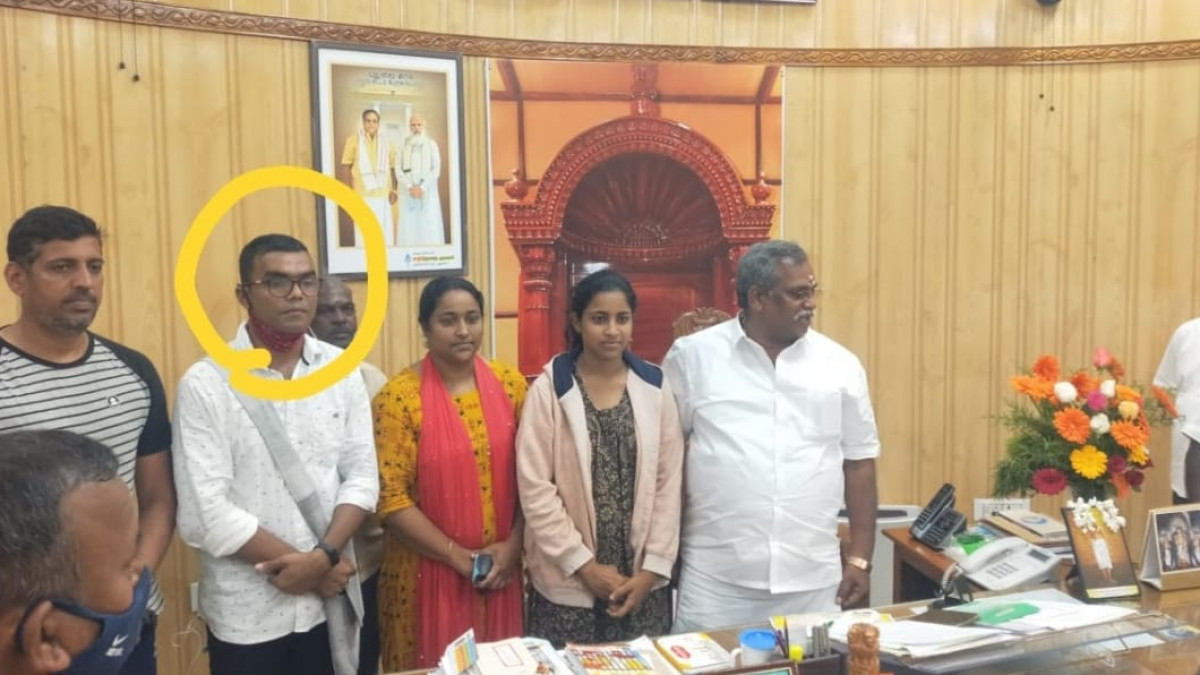 Chittaranjan Pradhan Felicitated By Tamil Nadu Speaker, MLA After His Act Of Bravery

Recounting his heroic effort, Chitta said, “I noticed a commotion on the beach and then discovered three people helplessly crying for help as they drowned in the waves. I had no second thoughts in my mind other than saving the three hapless souls. I managed to gather all my strength and pulled one after the other to safety, but unfortunately, I could not rescue the third girl.”

The headmistress of his Sri Aurobinda Purnanga Shikshya Kendra, Pushpanjali Sahoo lauded Chitta for showing valour in the face of dread.
Survivor Amrita also showered praises on Chitta for saving their lives. “Chitta Bhaiya (brother) dragged me and my coach who was also drowning to safety.

However, by the time he tried to pull out the other girl, she had slipped much deeper into the water. So she could not be saved. I will always remain grateful to Chitta Bhaiya. Had he not appeared as a God for us, who knows if we would have been alive?”

What the Ukraine Crisis Means for India